Are Your Rear Brakes Working? 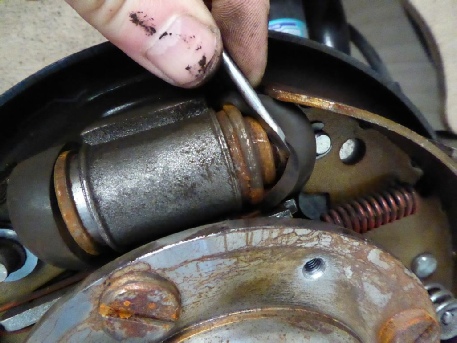 Recently a friend brought his Morgan to the shed for the installation of a remote greasing kit. When pushing the car into position for the hoist I noticed quite a lot more effort than normal was needed to move the car. I thought “probably just a badly adjusted handbrake”.

Once on the hoist I tried spinning the rear wheels. The R/H was difficult to turn, the L/H was normal. Unusual - perhaps the self adjuster had over adjusted on the driver’s side (all Morgans post ’93 have self adjusting rear brakes).

Next step was to remove the brake drums. It took a lot of effort to remove the binding drum on the R/H side but with a lot of tapping with a brass mallet it gradually came off.

Poking around the various components of the brakes revealed the pistons in the brake cylinder were not moving at all – even when the brake pedal was applied they would not expand or retract. This was true on both rear brakes. Peeling back the rubber dust protectors revealed the problem – rust and lots of it on the pistons. They were frozen solid.

The photo to the right shows one of the cylinders in cross section. Note the rust on both the pistons and the cylinders. 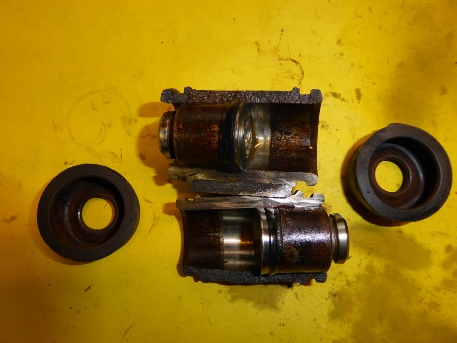 Now, the real crunch… this car was only 5 years old and had travelled a mere 5000kms.

So, how could this have happened? The answer lies in a number of combining factors:

The solution in this case was to replace the cylinders (Part #CW 15953). They are available from dealers or on eBay. Before fitting the new cylinders I removed the rubber boots and liberally applied Bosch rubber grease which is meant for exactly this purpose. More was applied on the inside lip of each boot to help stop ingress of air to the cylinder. The GoMog website has a detailed article on removing/installing these cylinders. 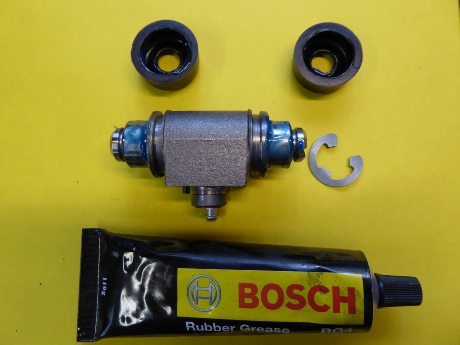 The real lesson from this experience is that we should be checking the rear brakes to make sure they are working. In this instance I would not have detected a problem had the brake not been dragging and the owner would have continued to enjoy driving his Mog blissfully unaware he only had front brakes. The handbrake, being a mechanical linkage, continues to work and so gives the impression all is well.

Checking your Mog’s rear brakes is a simple task. All you need to do is jack up each rear wheel, have someone apply the footbrake and see if the brakes are actually working (and free when no brake is applied). And note that even if you have an older Mog with aluminium brake cylinders they also have steel pistons and can corrode and freeze up. While the wheels are off the ground, remove the brake drums, pull back the rubber boots on the brake cylinders and apply rubber grease around the brake pistons and inside the boots.

It’s true that most of the braking effort comes from the front brakes but rear brakes are essential if you want maximum stopping power and directional stability under braking.