Anything that can go wrong will go wrong

I thought I would share an experience which provides a lesson for those who have this gearbox in their Plus 8.

The Rover 4 speed gearbox is not particularly strong and does not have a satisfying feel to the gear change which is why it is important to rectify any excess play in the selector mechanism. About a year ago I had replaced the selector shaft bushes and it had certainly made an improvement.

In January this year I drove the car to my local mechanic for its annual registration inspection. Everything was going really well – all the Lucas items were defying tradition and actually working, wheel bearings fine, handbrake fine etc. Next came the road check of the brakes. Then I hear this call from the car – “Geoff, is the gearlever normally this loose? And looked over to see our friendly mechanic holding the gearlever in mid air! 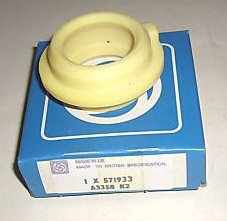 These gearboxes have a plastic spherical seat at the bottom of the gearlever which plays the critical role of keeping the gear lever in contact with the selector rods as well as keeping it in the gearbox. Need I tell you what can happen to 1970s British Leyland plastic after 35 years of enduring the heat under the gearbox tunnel of a Plus 8?

My next challenge was how to get home. We found with a bit of levering of a large screwdriver it was possible to jam the gearbox in one gear. I chose 3rd knowing that even on a hill I could take off in 3rd in the Plus 8.

The drive home was accomplished without drama but with me secretly hoping a spare part would be unobtainable and I could finally replace this gearbox with a nice 5 speed Toyota unit.

However, a bit of Googling found several sources of the original BL part. It is Rover part # 571933. I bought mine on eBay but it is available from British Motor Imports at McGraths Hill and also from Scotts Old Auto Rubber. Cost approx $60. The good news is that the part can be easily replaced in a few minutes, without having to remove the gearbox tunnel.

If you have a ’73 to ’76 Plus 8 I would recommend buying this part and fitting it. Undoubtedly your little plastic spherical seat is just as likely to fall apart as mine if it is the original.